These pages describing Elder Dempster Lines and providing a portrait of some of its operations to West Africa are very much a personal view by Mike Ingham, who served on the seagoing staff of the company.

In the 1960s he was a Purser on the cargo ships and passenger liners of Elder Dempster Lines (and subsequently with Canadian Pacific Steamships), rising from Cadet Purser to Writer (Junior Assistant Purser), and to Assistant Purser.

He maintained his link as a member of the Elder Dempster Ex-Pursers’ Circle and the Elders of Elders (the Elder Dempster Pensioners Association), both now sadly disbanded, and his continuing maritime operations have largely been confined to small boats.

His first trip was on the passenger liner Accra, sailing from Liverpool on the regular service to Lagos in Nigeria, via the Canary Islands, Sierra Leone, and Ghana, and this was followed by a series of similar voyages on this - by far the best - mailboat.

Amongst other Elder Dempster ships he sailed on (coasting as well as foreign, and not just single voyages....) were the Accra’s sister ship the Apapa, and cargo ships included the Deido, Dumbaia, Eboe, Falaba, Forcados, Kentung, and Swedru (renamed the Maradi), with charters to Nigerian National Shipping Line and Guinea Gulf Line. 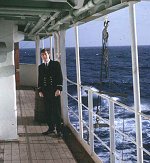 Serious episodes included a planned trip (complete with promises of 100% bonuses) on the Dumbaia to the Vietnam War on contract to the US government that came to nothing, and carrying refugees at the start of the Biafran War..... but looking back lots of lighter events such as a jaunt on the ferry Amsterdam from the Hook of Holland after doing the crew payoff at the railway station, and a short but memorable trip on the cable ship Recorder from Apapa which nearly saw someone overcarried to the Recorder’s base at Rio de Janeiro. He was, at a fairly early stage and probably with some justification, appointed a member of the ASSA (those who sailed with a certain 1/RO on the Accra will understand!).

Each Elder Dempster ship had its own character and style, and varied from the modern facilities and design of the F-boats to the more rugged demands of the K-boats, and from the formal sartorial requirements of the mailboats to the flipflops and shorts on the K-boats (K-boats were special!).

Short trips and long trips - including one on the Dumbaia that ran down almost the whole length of Africa, from Casablanca in the north to Lobito in the south and stopping off at what seemed like every country and every port on the way down and on the way back, including 90 miles up the River Congo to Matadi. To celebrate the journey down into the Southern Hemisphere and to mark passing the Equator a suitable ceremony took place, complete with King Neptune (the Carpenter), Queen Aphrodite, Sweeney Todd (the Bosun), the Doctor (the Mate), and Clerk of the Court, together with a specially constructed pool on deck (courtesy of the Chippy). All those who had not crossed the Line before (or could not prove it) were brought before King Neptune for the purpose of paying forfeit due for trespass. The appropriate formalities were performed and Crossing the Line certificates, complete with their official wax seals, were issued by King Neptune at his Court to all those involved, attesting that each had sailed beyond Latitude 0° 0' 0" and so become a Freeman of the Seven Seas. As part of the crossing the much anticipated experiments to see if the water really did go down the plughole in a different direction sadly proved inconclusive. 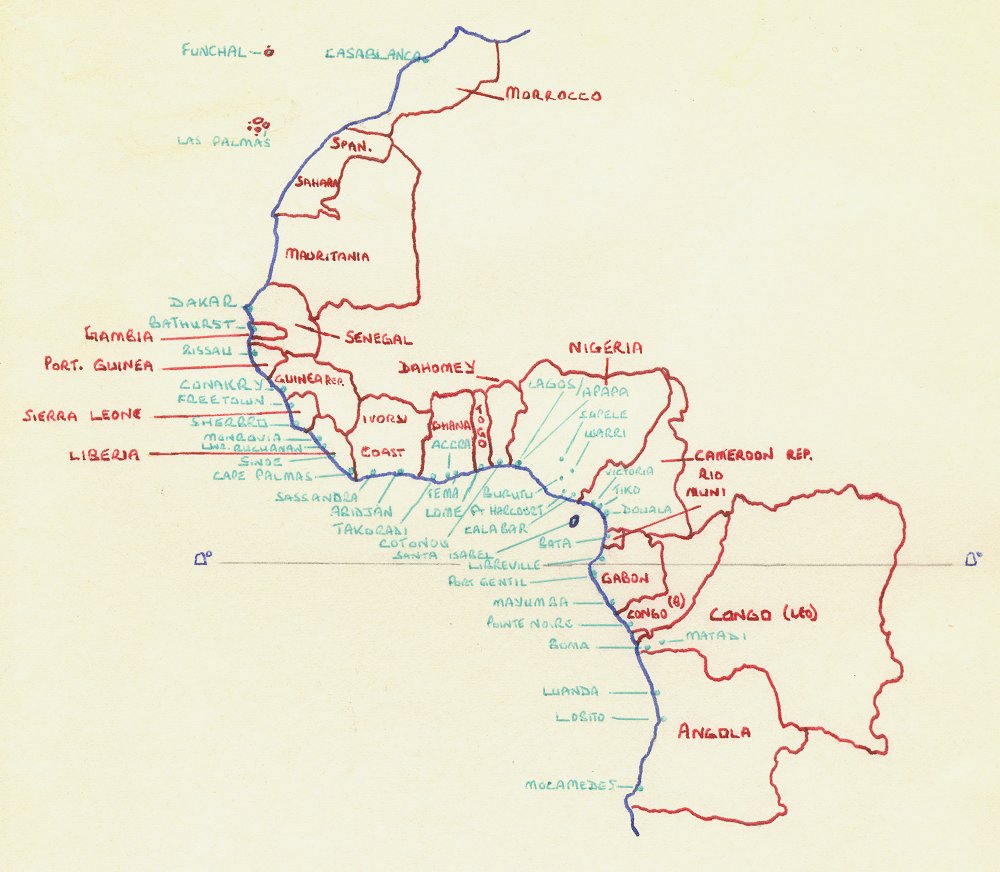 Been there! Sketch map to show the location of ports, prepared for the Port Papers file

A wide range of events can easily be recalled.....

.....including the frantic rush of putting together the cargo papers before sailing from the final loading port, chipping gangs, top end spanners, sailing up the Creeks and negotiating the Fork, smoko, palm oil chop, daily Paludrine anti-malarial tablets, 24-hour tallying, Kroo labour and crew payoffs, noting protest, indexing, ringing off, outturn reports, no hard hats or high-vis jackets and the only safety equipment a pair of (self-provided) linen gardening gloves to give a bit more grip climbing up vertical ladders from the lower hold and levering oneself over the overhang of the hatch coaming, the Seafarers Education Service library in its wooden boxes, the differing collections of movies each trip, log rafts with floaters and sinkers, that strange pair of small bleach and fixer fluids to make corrections, spotting discharge books with a double DR or VNC, working "greys" adopted by Pursers on cargo ships down the Coast (with fabric rather like the sacks of salt), on the mailboats early morning rolling gently offshore at Tema awaiting the pilot, the comprehensive breakfast menu, the kiddies sports, the bureau and D-deck office, the ship’s newspaper, boat trains and baggage masters, bingo calling and the Akratrak, the gram room, boat drills and passenger lists, and coasting trips on the Continent with relief crews flying out to the Netherlands in chartered Dakotas.......

.......signing-on weather, a last glimpse of the Pier Head, the gleaming woodwork and metal of the public spaces on the mailboats, the very real sense of being part of a close-knit community on the cargo ships, wearing uniform all the time on board (even when off duty), cabin doors rarely closed (although door curtains pulled) and doors only locked when in port, the gradual change in the colour of the sea homeward bound, from whites into blues again, The Channels, the rich smell of the land and the sharp smell of the river, lights on the water when arriving at night, the 1966 World Cup, thick slices of toast made from freshly baked bread in the galley of the Accra, Greenberg’s on Park Lane in Liverpool for your uniform, the enticement of Frisco’s wares at Las Palmas, time spent drafted as (un)willing volunteers between trips in the Claims Department in India Buildings waiting for a ship, visits to the Langton Castle by the Brocklebank Dock and the Carnarvon Castle in the centre of Liverpool, the Zillertal in Hamburg, the delights of Skerry’s on Rodney Street with its many mini-skirted distractions from the intended purpose of typewriter training for Cadet Pursers (well this was the swinging 60s) and subsequent hammering of the seemingly indestructible onboard Olivetti manual typewriters with total disregard for touch typing (the - still remembered - home keys of a s d f and ; l k j plus the space bar).......

.......false stows and unreconcilable outturns down the Coast (with hindsight foreshadowed by the initial training on the docks with its unshakeable logic as regards bulk loads), the fashions (cuban heel boots, narrow ties, and italian jackets with no lapels) and the music of the 1960s - from Donovan to the Rolling Stones, and Helen Shapiro to Dusty Springfield - and at the height of the Mersey Sound the Beatles brought out hit records apparently in praise of ED and its Pursers We all work on a Yellow-Funneled Ship / Elder Dempster Ship and K-boat Writer (well, they sounded like that at the time), not to mention the local group Gerry and the Pacemakers' Ferry 'Cross the Mersey that one trip on the Apapa was to have played us away from the Pier Head only to be thwarted at the last minute (but that ambition achieved many years later) .......

.......and many happy visits to that most friendly of countries, Ghana, with its welcoming ports of Tema and Takoradi, remembering especially the Ambassador Hotel in Accra and the Atlantic Hotel at Takoradi. 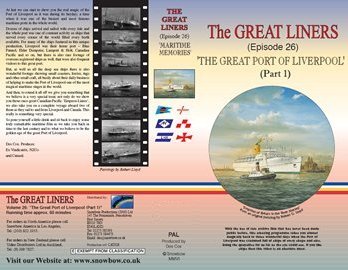 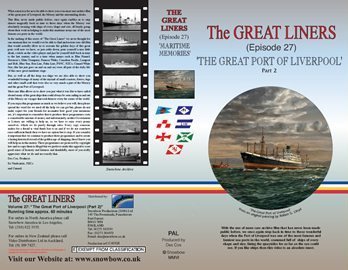 The Great Liners series of DVDs of Snowbow Productions capture the ships and shipping companies of those times, and are highly recommended. The roll call of names includes Ben Line, Blue Funnel, British India, Clan Line, Cunard, Elder Dempster, Ellerman Lines, Harrison’s, NZSCo, Palm Line, Port Line, PSNC, Royal Mail, Shaw Savill, and Union-Castle. These DVDs include two The Great Port of Liverpool DVDs, and for a glimpse of what it was like sailing down the Coast the Mersey Bound DVD (the stars of which are the Aureol and the Ikeja Palm, including Apapa and the Creeks, as well as Liverpool). John Goble served with Elder Dempster Lines, Palm Line, and Nigerian National Shipping Line. His thoughtful and well written book Palm Oil and Small Chop tells a story of trade and travel in post-colonial in West Africa, the final years of Britain’s long participation in the historic sea trade down the Coast, and the passing of a way of life. His account of visiting the ports of every coastal country in West Africa during the first decades of independence embraces the ships, their crews and cargoes, and the peoples from Senegal to Angola, and from surf ports or the creeks of the Niger Delta to more modern harbours, and will bring back many memories for those who sailed down the Coast. As well as being a history of Palm Line, Roger Kohn's book Palm Line - The Coming of Age 1949-1970 provides an account of cargo and shipping in West Africa, many of the issues described being common to Elder Dempster Lines. Another book of similar interest (and with EDL content) is So Life Be, an extensive collection of reminiscences and anecdotes about West Africa.

Whilst change is inevitable, it is difficult not to look back with some nostalgia and to recognize the achievements of earlier years. The 1960s were perhaps the last links with the end of the Empire - in particular the Elder Dempster mailboats, which provided a very civilized form of transport in a pre-jet air travel age. Since then there has been a catastrophic reduction in the numbers of ships sailing under the Red Ensign, although in the first decade of the 21st century the UK-flagged merchant fleet saw an increase by a half (an additional 250 vessels) and tonnage was trebled. The UK is still dependent on maritime trade, and it is worth noting that today 95% of UK trade by volume and 90% by value is carried by sea.

There has also been a change from traditionally built ships. The conventional and workmanlike five hatch - three hatches forward and two aft of the amidships accommodation - deep sea general cargo ship with its 40 to 50 man crew has been replaced by the singularly unappealing (but it has to be said, efficient) container ship which would struggle to raise a darts team ashore let alone a football team, and with turnrounds in port measured in hours rather than days.

Similarly, the good looking and elegant liners running scheduled passenger services have faded away, their place taken by the overpowering blocks of flats of the cruise companies (and we thought S-boats looked top heavy), with passengers in the process becoming guests. Although few shipping lines match the style of the liners of the past, two companies do stand out in recent years - Voyages of Discovery (the parent company ceased trading in 2017) which was winner of the Best Niche Cruise Line at the British Travel Awards for four consecutive years, and Saga Cruises. Their ships are of a very high standard, smaller than most cruise liners and providing a more personal service. Maritime Memories offers specially selected cruises designed for former seafarers and for ship lovers.

Ports change too, once familiar places and names being left behind, although not all change has been negative. Liverpool has moved on, and those returning after a long absence cannot fail to be impressed with the bright new feel of the city. A look at Modern Liverpool will give a glimpse.

In all of this Elder Dempster Lines has its place in the history of Liverpool, the UK and West Africa, and in the wider history of the Merchant Navy. It is hoped that these pages are a fitting record.