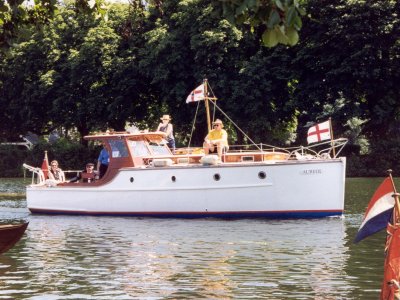 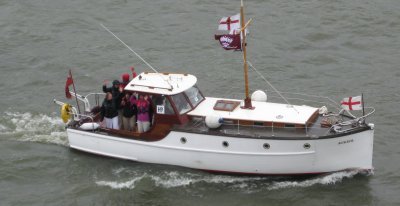 The motor yacht Aureol is one of the famous "Little Ships" which took part in Operation Dynamo, the evacaution of British troops from Dunkirk in 1940. She has made the return trip on a number of occasions including the 50th anniversary in 1990.

Forming part of the flotilla of Little Ships in the Thames River Pageant which marked the Queen’s Diamond Jubilee in June 2012 the Aureol is seen at Greenwich in the picture to the right.

Built by the Rampart yard in Southampton in 1936 this 30 foot boat is constructed of pitch pine on oak and carries the name of the postwar flagship of Elder Dempster Lines. Restored extensively in the 1960s and the original petrol engines were replaced with diesels, and refitted in 1999 with a new wheelhouse.

The Aureol is on the register of the Association of Dunkirk Little Ships.

When built she was originally named Kitty. After the war she was renamed Zena, and in 1956 appeared for the first time on the Lloyd’s register as the Aureol. It was thought that the vessel had been named after the Queen’s racehorse Aureole (perhaps funded by a grateful punter’s winnings) and that somehow the E at the end of the name had been dropped.

Or perhaps there is an Elder Dempster connection?
Can you shed any light on the naming of this motor yacht?
please get in touch
Narrowboat Salaga 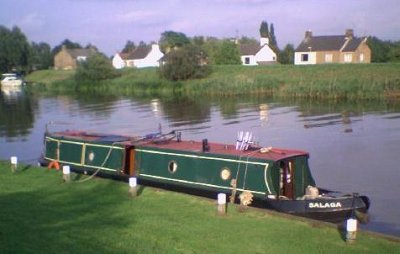 The motor narrowboat Salaga was built in 1991 by Wade Hassan Steel Fabrications of Liverpool. Construction of this 45 foot traditionally styled vessel is of mild steel.

She is named after the Elder Dempster Lines cargo ship Salaga, one of the 1940s built S-boats, later the Mamfe of Guinea Gulf Line.

Originally built in 1912 as a steam pinnace at Conyer in Kent this 52 foot boat is of teak construction. Converted in 1929/1930 and renamed Sundowner the vessel was owned by Charles Herbert Lightoller DSC*. Perhaps better known as the Second Officer on the Titanic, Commander Lightoller had sailed on the Elder Dempster African Royal Mail service in the late 1800s.

The Sundowner also formed part of the flotilla of Little Ships in the Thames River Pageant which marked the Queen’s Diamond Jubilee in June 2012, and is seen here as the flotilla passed Greenwich.

The Sundowner is on the register of the Association of Dunkirk Little Ships.

Also forming part of the Thames River Pageant which marked the Queen’s Diamond Jubilee in June 2012 was the Sapele of Crown River Cruises. Carrying up to 250 passengers this 112 foot vessel was built at Maasbracht in the Netherlands by Tinnemans Scheepswerf and entered service in 2006.

The naming of the Sapele recalls the former West African Terminal at Tilbury, which was visited by the Sapele and her sisters ships of the 1970s built S-boats. Sapele timber brought from the creeks provides another link to the name. There were two ships of the period which carried the name Sapele. The first (built at the same yard and registered in Hamburg) was chartered by EDL from 1977 to 1979, and was followed by the second vessel which was operated by Elder Dempster Lines from 1980 to 1987. In 1982 the Sapele saw service as a supply ship in support of the retaking of the Falklands Islands.